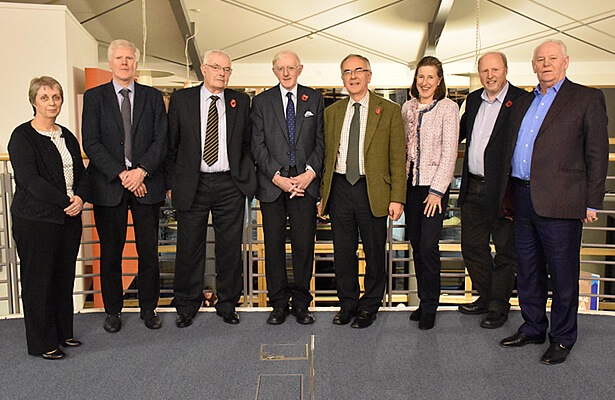 The fifth Sir Iain Noble Memorial Lecture was delivered by Ian MacDonald last Wednesday (9 November) at Sabhal Mòr Ostaig, where he gave a wide-ranging talk, entitled “Sorley MacLean: Life and Poetry”, on the life and work of the famous Raasay bard.

The annual lecture was established five years ago by Sabhal Mòr Ostaig and Urras an Eilein (Skye Gaelic Trust) – two organisations which Sir Iain helped to establish and with which he enjoyed enduring ties during his lifetime – to honour the work and achievements of Sir Iain, especially with regard to the College, the island and the Gaelic language.

It was through the vision and efforts of Sir Iain that Sabhal Mòr Ostaig was established in 1973. The college is now part of the University of the Highlands and Islands and offers courses in various subjects at undergraduate and postgraduate level all through the medium of Gaelic. Sir Iain was a successful merchant banker and businessman, but is perhaps best remembered in the Highlands for his constant and proactive support of Gaelic.

As such it was fitting that this year’s lecture looked at the life and work of Sorley MacLean, a life-long champion of the language whose poetry earned international acclaim which, in turn, helped to raise the profile of Gaelic among a global audience. Like Sir Iain, Sorley was also an important figure in the early history of the College, as one of the first Trustees of the College’s Board and also as the second ‘Filidh’ or Poet in Residence of the College in 1975.

Ian MacDonald is from Grimsay in North Uist, and has been a key figure in Gaelic publishing for many years, both as an editor and as the Director of the Gaelic Books Council, the principal organisation responsible for Gaelic literature in Scotland. He retired from the Books Council six years ago, but still assists authors and does editorial work. He played a major part in the Scottish Qualifications Authority initiative to produce the Gaelic Orthographic Conventions report and is a member of the Corpus Steering Committee recently established by Bòrd na Gàidhlig. He was co-compiler with Boyd Robertson of the Essential Gaelic Dictionary, published by Hodder.

Ian MacDonald said: “For me it was a great honour to give the Sir Iain Noble Memorial Lecture, and the topic I was given was very appropriate, in view of Sorley MacLean’s own very close relationship with Sabhal Mòr Ostaig.”

Sabhal Mòr Ostaig’s Principal, Professor Boyd Robertson, said: “There are very few people who possess the depth and breadth of knowledge of Gaelic literature that Ian Mac Donald has. As well as being an expert on linguistic matters and an editor par excellence, he is a fine scholar, as was evident in the lecture he delivered on Wednesday evening about the life and poetry of Sorley MacLean. The lecture was informed, reflective and insightful and worthy of publication.”

As part of the evening’s proceedings, the inaugural “Skye’s Young Gaelic Person of the Year” award was presented to Eilidh Rankin from Kilmaluag in North Skye for her contribution to the use and promotion of Gaelic.

Eilidh attended the local primary school in Kilmuir and then Portree High School. She was involved in many Gaelic events in her youth –  including drama groups and productions such as “Na Mo Chuid Aodaich” as well as local and national Mods where she competed in various competitions for poetry, storytelling, conversation and reading.

Since leaving school, Eilidh has continued with her commitment to the Gaelic language. At first she worked at the Gaelic Childcare Facility, Fàs Mòr, in Sleat, and in more recent years she has worked as the Project Officer for FilmG, MG ALBA’s Gaelic short film competition, which is delivered by Cànan, the multi-media company based at Sabhal Mòr Ostaig.

Urras an Eilein Trust Administrator Murdo Beaton said: “We congratulate Eilidh, who was a very worthy winner of this new award. Urras an Eilein intends for this award to be presented at future Sir Iain Noble Memorial Lectures and we are hopeful that next year many other young people from Skye communities will be nominated for the award.”

After receiving her reward on the night, Eilidh Rankin said: “It’s fantastic that Urras an Eilein wants to support young people who have made a commitment to the language. I am delighted, and very surprised, even to have been nominated, and privileged to be the first winner of such a prestigious award.”