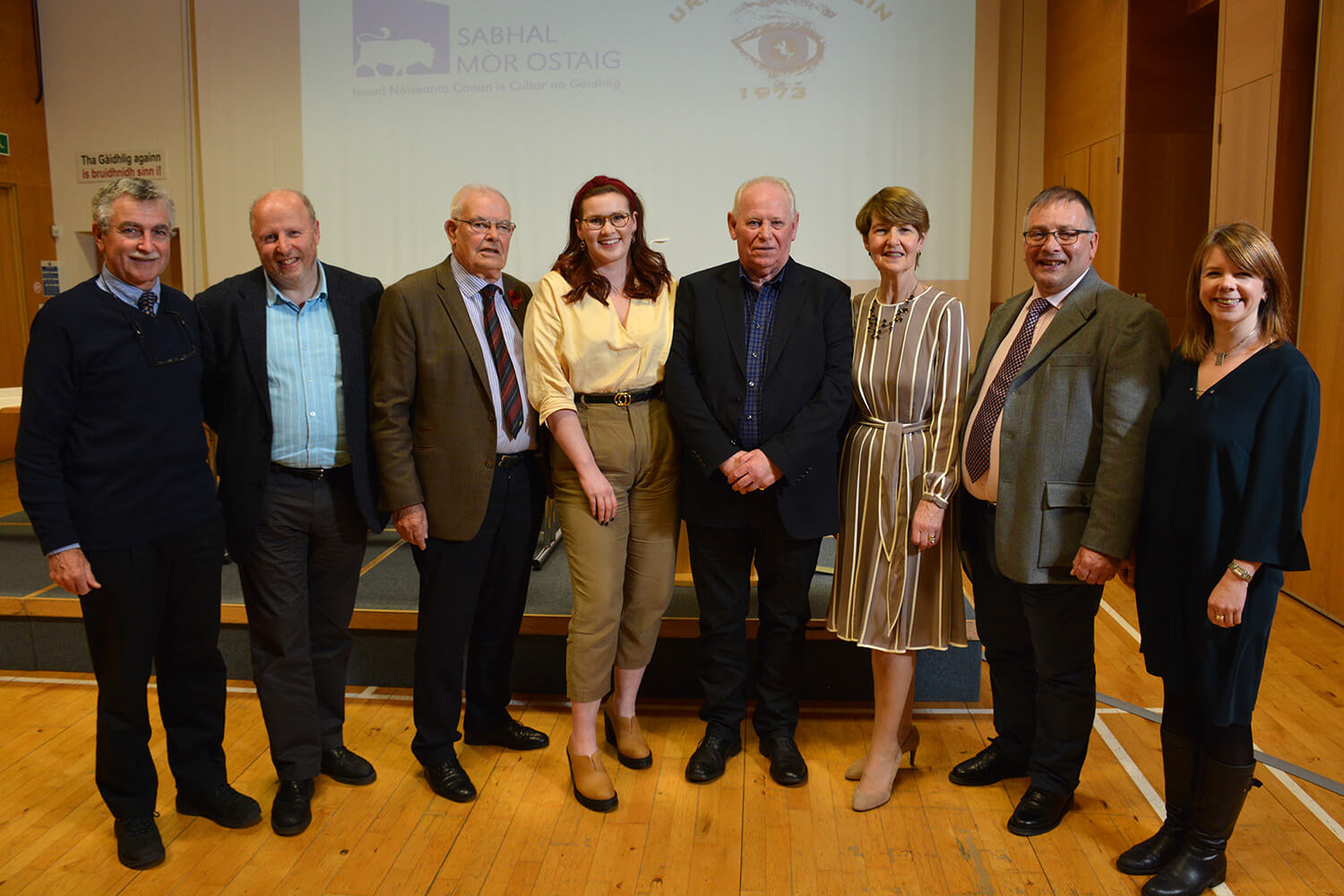 The eighth Sir Iain Noble Memorial Lecture was delivered by Christina Walker, from the Isle of Lewis, on Thursday 31 October at Sabhal Mòr Ostaig, where she gave an engaging and thought-provoking lecture entitled, ‘The language of community, the language of bonds.’

Christina was born and raised in the village of Shawbost on the west side of Lewis; in her own words, “a pretty little village famous for different reasons.” In her lecture, she accounted many lovely images of the precious upbringing she received, the wealth of their mother tongue throughout the community and the deep connections between community life and language.

Gaelic was spoken in every home when Christina was growing up and it was most definitely a living language. She explained what she meant by a ‘living language’ – “a language that was used in every situation, at every level, a language that is admired and valued and is as much a part of that community as the community is a part of the language. They are living together, co-dependent, growing and prospering together, changing together and, unfortunately, withering and dying together also. Language is alive in the hearts and souls of everyone who speaks it and is also in the heart of the community.”

Everybody in the community spoke Gaelic and it was in Gaelic that the bonds that held them all together were initiated. Many aspects of community life were woven together in those ties – genealogy, way of life, work, animals, nicknames, rituals, shops, the church and education – and Christina had many insightful and witty examples of how the language and the community were inextricably linked throughout her childhood.

“We were connected together in Gaelic from the very beginning. It was in Gaelic we got to know one another, in Gaelic we played and conversed, had fun and also fell out, and to this day when we meet each other, it is Gaelic we use because that is what we had from the outset. That is why it is so important to have bonds that are rooted. In my opinion, I cannot overemphasise the importance of this to a language. I am certain Sir Iain would agree on the influence of community and roots.”

Mark Wringe, course leader on the BA Language and Culture programme and host for the evening said: “Christina Walker demonstrated how fundamental the bonds of community are in the language choices we make. Language is our only medium for making sense of ourselves and to each other. Any of us can learn a new language, but it’s the bond between ourselves and our community, friends and family that put warmth, humanity and loyalty into our choice of language. Without community, Gaelic can’t survive. Christina showed us just how inseparable and co-dependant language and community are.”

As part of the evening’s proceedings, Urras an Eilein have also given an award each year for Skye’s “Young Gaelic Person of the Year” and this year the award was presented to Alannah Beaton from Portree.

The evening concluded with a tune on the pipes, played by Dr Angus MacDonald, Glen Uig, and the host, Mark Wringe, gave thanks to Christina Walker on behalf of Urras an Eilein and Sabhal Mòr Ostaig.

The annual lecture was started by Sabhal Mòr Ostaig and Urras an Eilein – two organisations which Sir Iain helped to establish and with which he enjoyed enduring ties during his lifetime – to honour the work and achievements of Sir Iain, especially with regard to the College, the island and the Gaelic language.

A copy of Christina’s lecture is available below: