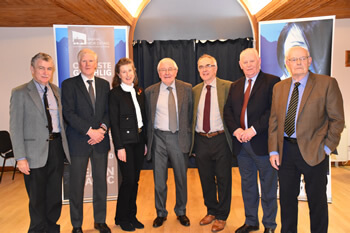 The sixth Sir Iain Noble Memorial Lecture was delivered by Lord Minginish, Roddy John MacLeod, on Tuesday 14 November at Sabhal Mòr Ostaig where he gave a detailed and fascinating talk on crofting legislation, and made particular reference to the work of Fearann Eilean Iarmain.

The annual lecture was started by Sabhal Mòr Ostaig and Urras an Eilein (Skye Gaelic Trust) – two organisations which Sir Iain helped to establish and with which he enjoyed enduring ties during his lifetime – to honour the work and achievements of Sir Iain, especially with regard to the College, the island and the Gaelic language.

Sabhal Mòr Ostaig Principal, Prof Boyd Robertson said:  “Roddy John’s lecture was, as anticipated, one of substance and insight.  He charted with great clarity the various developments in land tenure and legislation in the past century and raised a number of questions about the Gael’s stewardship of the land and relationship to crofting”.

On delivering the lecture, Lord Minginish, Roddy John MacLeod, said:  “It was a great honour to be asked to deliver the Iain Noble Memorial Lecture.  As Iain was himself a landlord of a crofting estate, I thought it appropriate to talk about the history of crofting legislation, especially at a time when there are proposals for change.  As I said in my lecture, we sadly cannot know what changes Iain himself would wish to make.  One thing for sure, though, they would have been original and imaginative.”

As part of the evening’s proceedings, the second “Skye’s Young Gaelic Person of the Year” award was presented and this year went to Martin MacLure from Aird in South Skye for his contribution to the use and promotion of Gaelic.  Martin is the College’s Short Courses Manager and this is the second time the award has gone to a member of staff at SMO.

On receiving the award Martin commented:  “It is great that Urras an Eilein are supporting young people from the Island who are interested in and working in Gaelic and I hope, in the future, that this will encourage other young Gaelic speakers to maintain the language.  I’m delighted that I was nominated for such an award and didn’t expect it at all.”